Guilt, Sorrow, and a Strange Series of Events. 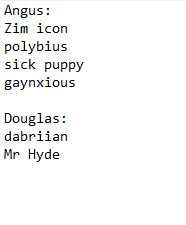 Douglas reunites with me and we begin to talk again. Douglas’ new reunion with me results in him trying to gaslight me into believing that Mewtley and him have done absolutely nothing wrong, that my memories of my friendship with Angus were delusions, and that talking about the situation further would be pointless. I am successfully manipulated for a time. But as soon as I begin to question the viewpoints that Doug has drilled into my head, Doug cuts me off. I try and rekindle our frienship. Mewtley stops using Vent, but instead uses his server to vent. Doug breaks up with Russ, but time passes before he begins dating Angus. Doug shows suspicious behavior about his system. His system is definitely fake. He treats is alters like OCs that he LARPs which is obviously a bad idea. Mewtley’s original dependence on Doug resurfaces, and Doug begins to greatly influence his decision making as well has his morality and more. Cham gives me a wake up call about Doug's gaslighting and I am back.

For context, my friends didn't cut me off for the callout at all. A lot of them stayed then left me for unrelated reasons. But okay, Angus.