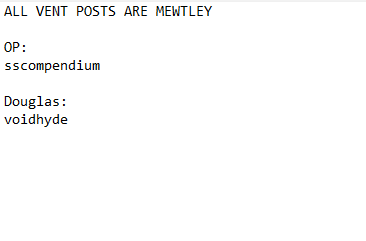 Mewtley remakes his Vent accounts and goes back to the same things he was saying in the first place. I confront him time and time again, screenshotting as much as I can. I apologize if the screens take up a bit of space. He even speaks about things I told him in confidence. I also manage to learn more about Russ, and the fact that his system was fake the whole time. Doug ends up telling me that I was just a tool for venting, and he didn't like me at all. Russ is controlling of Doug, and I tried to tell Doug that his relationship was unhealthy. Since Tumblr bitches will be Tumblr bitches, he denies saying he's become too attached. Strange that excuse doesn't work for me...I wonder why? We find ourselves stuck in a loop of me finding Mewtley's vents, him deleting them and remaking, and from there we continue. He didn't apologize for any of this at all. It is the Vent Cycle of Transmigration. It is revealed that Angus cheated on Jesse with Doug, in which Doug was also cheating on Russell. Jasmine is a comforter of many of the participants, including Russell, Doug, and Angus. That was such a waste. I blame myself for being taken advantage of.

(It wasn't even a Lesbian flag)

Mewtley’s mental health begins to deteriorate rapidly. Has a lot of pent up jealousy and hatred for Douglas due to his relationship with Russ. He wants them to break up, as much as he says he didn’t. Mewtley admits that he’s setting himself up to be dependent on Doug, much in the same way Douglas was dependent on Russell. He even made a post directed at me. He claimed it was about his ex, but it literally wasn't. Douglas snaps and threatens to call the police on my father/family in general. After hearing about the fact that my father would likely be put in concentration camps for being undocumented, Douglas changes his threats to my father and begins to blackmail me.

In December, I apologize for a lot of the actions I've done.