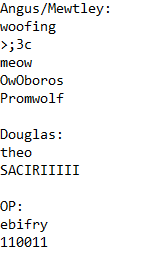 I first met Mewtley in May of 2018 through his Discord server. He had 3 people that I met alongside him: Doug, Jesse, and Russ. I got along with all of them pretty well, and was having fun in his Discord server. I was a fan of him since 2017, and have made prior attempts to contact him and get to know him. I was obviously pretty excited, for what it's worth. But, things began to happen that made it spiral a bit out of control.

At the time, Doug and Russ were dating. Russ did not like me for an unknown reason, but I can attribute it to quite a bit of things when I speculate. Russ blocked me and banned me from the server even though I have not broken a rule and got specific permissions in the vent channel (which I did discuss my drug addiction in vents). One morning, Doug sends me that he is "sorry" and blocks me as well. It is revealed that Russ forced him to. Mewtley is still my friend though. I remake my Discord account for unrelated reasons, and reunite with Doug. Doug vented to me frequently, which I would have no problem with if he had not gone so far as to explain his "system" in which he talked in detail about an alter he had that was a rapist. I am a rape survivor. I think enough is said. Mewtley doesn't readd me on my new account, however we do stay in contact through Tumblr asks. One day, the alter that Doug was telling me about gave me wind about Mewtley's vent account. On this vent account contained a lot of vague posts about me, judging me outright for my drug addiction. Out of anger, I confronted him in a server called Valium Menu. This server contained a number of my friends, but the most important one was Cham. Mewtley did end up joining, and we discussed what happened. He apologized for it and I was ready to move on. Had it not been for the fact that it didn't end there.